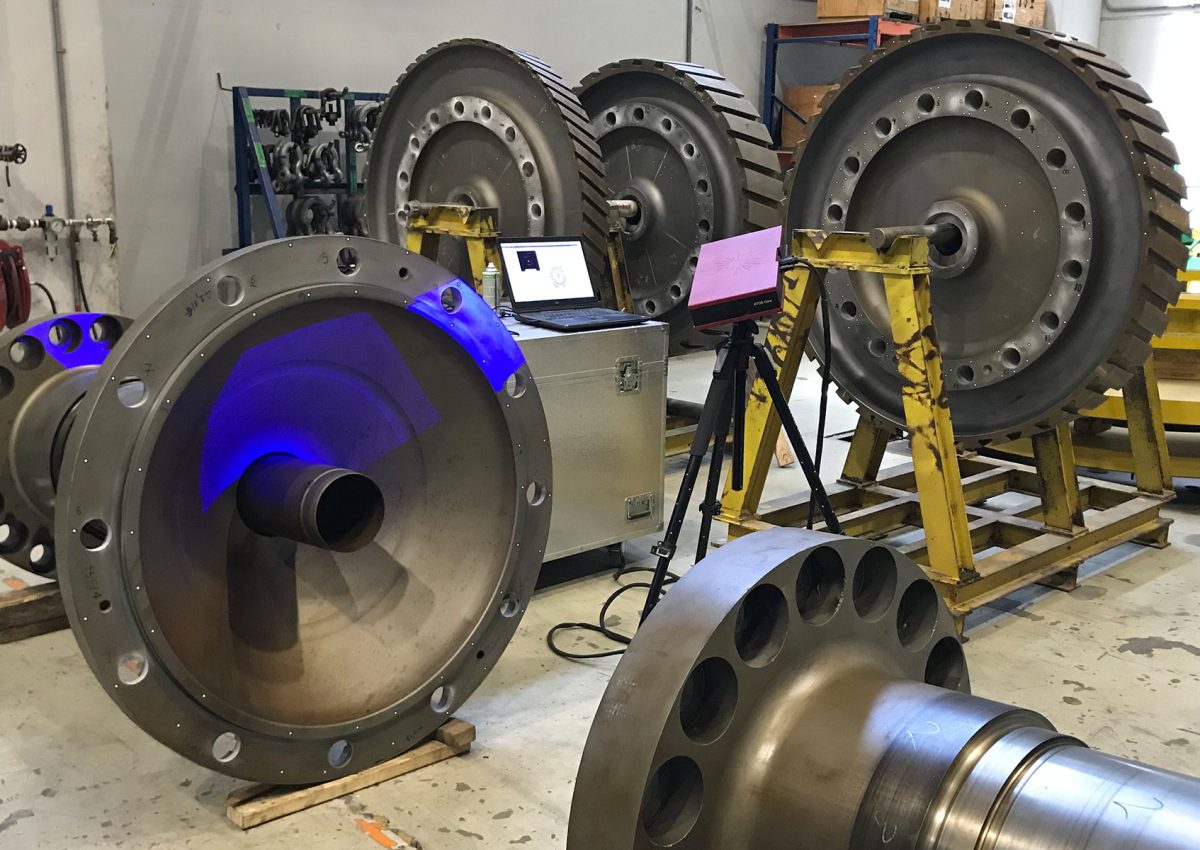 Normally, colored lights flashing around in different directions is something seen at a concert, not in an advanced engineering research lab in Dammam, Saudi Arabia.

Yet, watching the lab’s automated blue-light scanner move around a gas turbine part taking digital images is definitely something to talk about for Kamel Tayebi and his team.

His team, which includes Saudi nationals, supports the repair center with new and innovative ways to assess the condition of gas turbine components in terms of fitness for use. Their other research work on blade vibration sensors helps to identify cracks or further weaknesses that must be corrected.

The Center’s digital blue-light scanner, mounted on a programmable robotic arm, is the only one in the Middle East and Africa. The H&H R&D team has been engaged in research to optimize the outcomes of this innovative technology to meet the productivity requirements of the shop, while providing the highest quality of part inspection in an easy-to-use, digital format. The team has also been active in pushing the envelope of application of manual scanners to initiate new ways of serving repair processes, notably for rotors and fixtures. This pioneering work was selected to be presented at the Advanced Manufacturing & Repair for Gas Turbines conferenceAdvanced Manufacturing & Repair for Gas Turbines conference, one of the most prestigious international mechanical engineering conferences hosted by the American Society of Mechanical Engineers.

“As an advanced research team, we are pushing the envelope on what digital blue-light technology can do. We are the only ones doing this in the Middle East and Africa,” Tayebi said.

An example of the Saudi-based R&D team’s approach was to explore the benefits of mounting the scanner on the robotic arm.

“We conducted a root cause analysis, asking how we can optimize use of the robot by configuring it to take the minimum number of shots from the optimal angles. By adjusting the sequence of shots, the incident of light [angle of light], and movement of the robot arm, we were able to reduce cycle times significantly,” Tayebi said.

The solution allows GEMTEC technicians to examine more parts faster, while still maintaining the impeccable reliability of the scanning results. This helps the facility reduce turnaround times, which in turn, can contribute to faster deliveries for outages at power plants.

“Our work, including this blue-light solution, reflects how much GE is investing in the region, how much it is investing in Saudi Vision 2030, and in the youth of the Kingdom. A major contributor to this accomplishment is Badi AlQuzayz, a young Saudi engineer who has used this technology on thousands of turbine parts. Here, he is involved in projects not being done anywhere else,” Tayebi said.

Tayebi, who is Canadian, formed the nucleus of the team with two Saudi engineers – one with a graduate degree from the UK and another fresh graduate from King Saud University. A fourth researcher holds an engineering degree from India.

After receiving training in Switzerland and on the job in Dammam, the team worked on one of GE’s major engineering projects involving turbine parts characterization using digital optical measurement with blue light scanning, where they were exposed to hundreds of parts and assemblies of various sizes, shapes, and complexities.

“With that unique exposure, and by being located at the GEMTEC campus, the team has developed tremendous expertise. The variety of requests for blue light digital inspections by the folks in the shop only expands their experience further,” Tayebi said.

The Hot & Harsh R&D Center, which houses the advanced metrology research team, was established to address the extreme conditions experienced by gas turbines in regions such as the Middle East, Africa, and other parts of the world.

This research is important because the intense heat, combined with harsh conditions, such as sand-carrying air, puts extra stress on gas turbines. As well, in the Gulf region, heavy fuel oil is widely used because of its availability and low cost; however, this fuel is much harder on turbines than natural gas, and so the power generation equipment running on it requires much more frequent maintenance. The research done at the Center helps customers address all these issues and more.

Any way you look at it, that is something to shine a light on.

Read more here about GE Gas Power in Saudi Arabia and across the Middle East, North Africa, and Turkey.

View all from: Saudi Arabia,