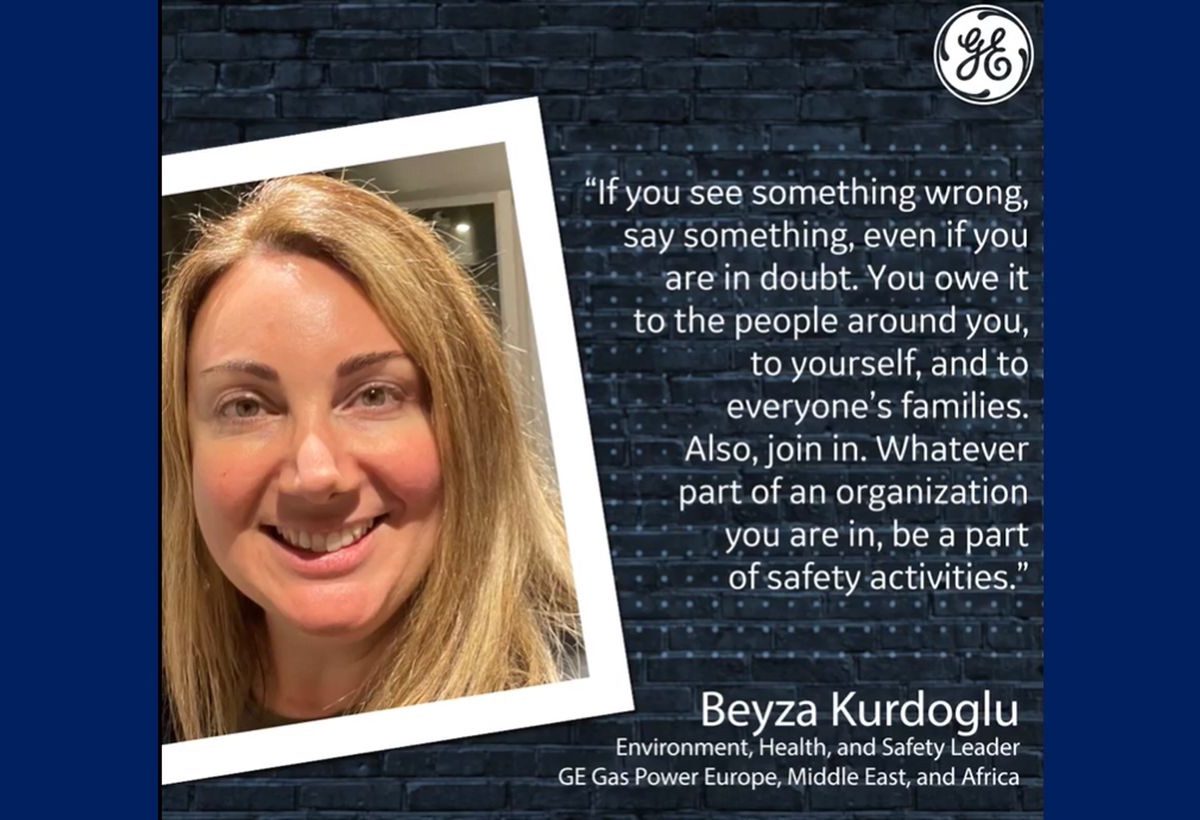 Safety Culture: It’s How Companies Show Employees Really Are Their Most Valuable Assets

“I’m living my passion and my dream job.” That’s how Beyza Kurdoglu begins her description of what she does as the Environment, Health, and Safety (EHS) Leader for GE Gas Power in Europe, the Middle East, and Africa (EMEA).

“What my team and I do is about people, about ensuring that everyone goes back home as safe and healthy as when they came to the worksite, shop floor, office, or any other location at the beginning of their shift.” This commitment applies not only to GE employees but also to customers, contractors, and others impacted by our activities.

Beyza has worked in EHS since being exposed to the field in engineering classes at university, but her 17 years at GE have not only been about a passion for safety; they have also been about performing that work at GE.

“EHS is truly a core value here and we believe strongly that people are our most valuable asset. EHS is not separate from operations; it’s embedded into our operational strategy, and that means we never stand still with EHS. We continually look for improvements in systems and performance, and always drive a safety culture of learning. Our commitment to safety is one of the core values that make people choose GE, and how we demonstrate we care about them.”

She adds that caring about employees also really means caring about their family. “When an injury occurs, we understand that it’s not just a number. There is a person behind that number … actually multiple people because their families and friends are impacted as well.”

One of the initiatives Kurdoglu is reinforcing across GE Gas Power’s EMEA worksites is Life Saving Principles (LSPs). These are a list of 13 activities or operations that are considered high-risk operations, e.g., heavy lifting, working at heights, or working with electricity. Presented as pictograms on a poster, it’s a clear visual list that reminds workers that failure to abide by safety precautions can result in a serious injury or worse.

To make the reporting of environmental, health, or safety issues even easier, the EHS team, together with digital experts, is developing unique QR codes for each site and then posting that code across the workplace. This way workers can easily scan the code to report any issues and be sure it has been received and addressed.

Kurdoglu’s team is also working to more deeply embed GE’s Stop Work policy that encourages any person on a worksite – not just site leaders or EHS team members – to initiate a stop work order if they see something unsafe.

A recent example of the importance of this universal authority to stop work occurred at an outage worksite in Europe. The weather had deteriorated considerably, and a staff member called a stop work on account of the wind. The area, which included exhaust stacks, was evacuated. A short while later, the wind knocked down one of the three exhaust stacks, an incident that could have caused serious injuries, Kurdoglu said.

Another stop work collaboration example is from a new unit project installation site in a remote location in Sub-Saharan Africa (SSA) with security and community related challenges. Prior to workers being mobilized to start construction work, a thorough EHS assessment was done, which revealed a couple of areas requiring improvement and the project team cooperated in prioritizing safety. The project initiated a stop work at site level with focus on closing out the identified EHS issues and ensured mitigations were in place before resuming work on site.

Yet another example of stop work in action, Kurdoglu says, is a common situation that particularly impacts people who make lots of work calls or attend virtual meetings. People are tempted to use driving or commuting time in their car to conduct business. However, the stop work culture encourages GE Gas Power employees participating in work calls, if they believe someone on the call is driving, to ask to end the meeting and reschedule it for a time when all can join safely.

Kurdoglu raises this issue with employee groups by asking them to think about what’s more important – their lives, or the call. They always choose to stop the call. A colleague in the Middle East and North Africa (MENA) told her after one such discussion that she was in the habit of getting on regular conference calls during the half-hour drive taking her child to school. When asked to consider her actions, she realized the danger to both herself and her child. So, she changed the time of the call, recognizing that by doing so, she also gained valuable quality time with her son.

A related passion for Kurdoglu is inclusion and diversity. Like safety, it both helps define a company’s culture and shows all employees are valued.

She says work in expanding gender diversity is crucial, especially in an industry where a significant majority are men. She’s also aware that other types of diversity, such as that of religion, nationality, ethnicity, and more, should be encouraged. The importance of this was influenced by her own experience.

Based in Turkey, twice in her career, she has influenced hiring managers to consider opening jobs in other locations that were initially advertised in only North America. She argued her case by explaining how important it was to have someone with an emerging markets perspective in the function, given the increasing share of revenue and customers that are located outside of North America. “You need voices from every part of the world.”

She credits GE for acknowledging the potential benefit and hiring her, despite neither role having previously been based outside the United States. “Oftentimes, hiring managers just need someone to open their eyes to an alternative perspective, so if you feel you can do a job, even if you’re not based in the location(s) it’s been advertised in, always at least initiate a conversation to present another point of view.”

Kurdoglu also actively works to encourage gender diversity, including in her ~20-person strong team, which, when she was hired in September 2021, had only one woman. She became the second. Since then, she has hired a third woman, and is committed to hiring and promoting more qualified women in the future.

Hiring, however, is not the full story, she says. Employees need to feel included. “I’m taking steps to ensure that when I’m making decisions, I’m accounting for the views of diverse members of my team. I want to be sure they know their opinions matter.”

For a recent project, she selected four people, including one woman. “They were from different countries across EMEA, at least one each from Europe, SSA, and MENA,” she explains.

“When they got started, they came up with a great outcome that has empowered our teams across the pole. It worked because they could see that their opinions were part of the decision making, as they brought valuable perspectives from their different experiences to problem solving.”

Be yourself and a part of the solution

As Kurdoglu was preparing to begin her current role in September 2021, she had a moment of uncertainty. She’d worked in GE Healthcare, GE Aviation, and GE Power, but nevertheless, began to question how she should behave in this new role, with new colleagues and in this predominantly male environment.

“But then, I thought about the recruitment process. I’d had conversations, not interviews. I didn’t pretend to be somebody else, I was myself. They hired me because of me. In thinking of this, I realized I should just be myself and bring my authentic way of doing things to the role. After all, that’s what we are all hired and valued for. I value people for who they are, not who they pretend to be. So that’s what I’ve done.”

With companies and communities across the globe marking the UN’s World Day for Safety and Health at Work, Kurdoglu suggests two actions that everyone can take to increase safety in the workplace.

“The first is, if you see something wrong, say something, even if you are in doubt. You owe it to the people around you, to yourself, and to everyone’s families. Maybe you save a life.”

Her second piece of advice? “Join in. Whatever part of an organization you are in, be a part of safety activities.”

By helping to build or improve our organization’s safety culture, we can all play a part in helping to improve the workplace for everyone.