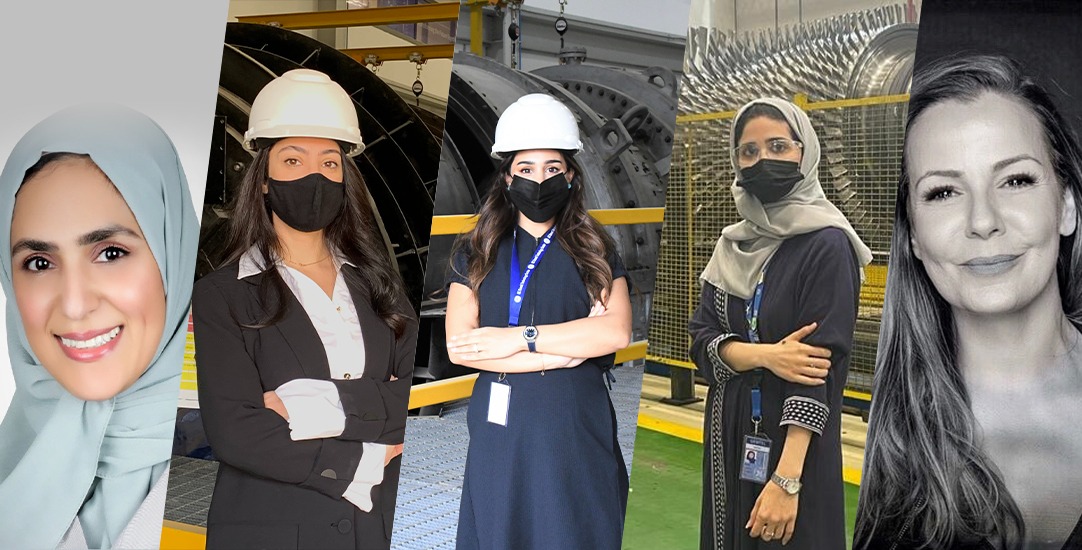 What Does It Take to Succeed? Five Women at GE Share Their Advice and Their Stories

Professional success is usually built on a combination of determination, self-confidence, and a willingness to stretch out of your comfort zone. These are common traits at GE, where its diversity means there are as many expressions of these characteristics as there are employees.

This diversity is important to GE, which recognizes that having people with different experiences, backgrounds, and perspectives is crucial to the company’s innovation, growth and ability to deliver for customers.

That commitment is backed by action, with the recently released 2021 GE Diversity Report showing that GE has largely achieved pay equity for men and women holding similar jobs.

The company also continued to expand the number of female employees globally, with 27.2% in leadership roles, 26.5% in professional roles, and 22.3% among all employees. Two of four leadership positions on GE’s Board of Directors are held by women.

On International Women’s Day, GE shines a spotlight on five high-achieving employees from across the Middle East who share their journeys and their advice.

In 2012, Summer M.S. Nasief, who today is Healthcare Digital General Manager for GE Healthcare Middle East, Saudi Arabia and Turkey, was one of the top performing US-based employees at a previous company, when the multinational announced a plan to launch their healthcare business in Saudi Arabia. Nasief, who speaks Arabic and holds a Saudi passport, applied.

But back then, only about 5% of the workforce in Saudi Arabia was female, and conventional wisdom held that only men should be considered for senior corporate roles in the Kingdom.

“I raised my hand. I said healthcare is my thing and I’d love to go for it. The first couple of times, the answer was no. But I was persistent. I told them nobody had the skill set, the language, the passport. Through relentless negotiations, I ended up asking them to give me six months to try it out. If it doesn’t work we can triage a solution. In the end, we grew the business 100% year over year.”

Nasief’s success ultimately gained her national recognition that led her to collaborate with the Saudi Ministry of Labor on steps to promote women’s empowerment in the Kingdom. This was followed by a fellowship from the Aspen Institute’s Middle East Leadership Initiative. She also was selected by Arabian Business in 2015 for its ‘Top 100 Most Influential Women in the Arab World’ list.

During her career, Nasief has held senior international roles with IBM, Honeywell and Microsoft, among others, before joining GE Healthcare. Her advice, especially to women, is to understand what “no” really means.

“If you are a girl growing up in the Middle East, you hear ‘no’ a lot. But I’ve never taken no as an answer. No is not a no; it is an opportunity to stop and think and approach things differently, and to find a way to make it work in the environment you are in.”

“One of the most powerful tools in life is to believe in yourself. If you do, you can accomplish anything. You need to hold on to that. Hold on to your inner voice.”

Make Your Own Future

Fatima Al Bahrani, People Operations Manager, Service Delivery, for Saudi Arabia and Bahrain at GE, made a bold choice in high school when she wasn’t accepted into the college degree program of her choice. Rather than matriculate to the college where she was accepted, she pushed back. “I didn’t want to pursue a life that’s not for me. So I took a risk by withdrawing from the college that I was accepted in and waited.”

“Sometimes you have to fight for what you want, and pursue the life you make for yourself, not what fate gives you,” she says.

In the end, she was accepted into the program she wanted and earned the management information systems degree that has opened the way for her to pursue her three passions: IT, business and people.

The IT side of her thinks, “‘Why do it this way and not another way?’ I’m always thinking about how technology can help us to do processes differently, more quickly, which means we can focus more on the human part.”

For her, it’s not a zero-sum-game when it comes to technology and people.

Doing work that is people focused helps give her a sense of purpose. “Every day, people come to us for assistance. Every day, I contribute positively to someone’s life. It’s been a successful day if I think back on the day, and I’ve met new people and made their lives easier.”

Her advice to young women making university choices or beginning their careers is, “Be courageous, be bold, and get out of your comfort zone.”

Proud to Be Educating

Amani Ramadhan, the Lead Education Specialist for the training cell at the GE Kuwait Technology Center (GEKTC), faced enormous challenges while working to earn dual undergraduate degrees, so she’s passionate about helping Kuwaitis, and people from across the region and beyond, build their engineering and technical skills at the facility.

“I’m proud of the center’s role in supporting a new generation of Kuwaiti and foreign engineers and operators,” she said, “As we help them grow their skills, we support the shaping of the future of energy, which then supports socioeconomic growth around the world.”

In this role that she helped to define, Ramadhan is responsible for coordinating all training programs at the facility. Up to 900 people a year can receive training in areas such as servicing and repairing gas turbines, steam turbines, generators, and other aspects of the power generation industry.

Ramadhan’s journey to GEKTC was long and difficult. While living in the United States, she earned degrees in Business Administration and Accounting, and Criminal Justice, all while raising her daughter and working part-time, and with her family far away in Kuwait. She gained experience in New Mexico as an accountant and audit officer, and in Los Angeles as Executive Secretary to the Consul General of Kuwait.

Having worked in both the government and private sectors, Ramadhan says, “I really enjoy speaking with high school students about what it’s like to work in the private sector, career pathways, and how to try to find the will to get through challenges that come our way. Life isn’t always easy but dark days are usually followed by ones full of light. You need to keep trucking through the difficult times to get to the light at the end of the tunnel.”

When Dana AlQattan, the Sales and Proposals Manager for the GE Kuwait Technology Center (GEKTC), was deciding what to study in university, she chose industrial engineering.

“I wanted do something related to science but didn’t want to focus on the technical aspect. I also wanted to understand the business side of things … and was intrigued by the idea of improving process systems. In this field, I could see there was more room for different opportunities when I graduated.”

That was important, because, as AlQattan explains, “I like to explore, to learn different things and different aspects of different businesses.” With an industrial engineering degree, her career options were much wider than if she’d done a more technically focused degree, she says.

She’s already had several very different roles and worked on projects around the world. Sometimes, those cross-border projects have presented unique challenges – like when she had to work on a sales negotiation in China and she and her counterparts didn’t speak the same languages! “It was tough trying to communicate through the barrier of different languages, but we got through it successfully.”

Today, AlQattan is one of three female leaders at GEKTC. However, throughout much of her career, she has often been the only woman in the room or on the team. “At both GE and my former employer, I was always considered part of the team and never felt overlooked as a female. My leaders pushed me to develop and grow and have always believed in my capability and the value I bring to the table.”

Her advice, particularly to young women, is: “Do not underestimate your ability and power to achieve great things. Success comes from believing in yourself first, and then working hard to achieve your goals.”

Sarah Kanadiley, HR Specialist at the GE Manufacturing and Technology Center (GEMTEC) in Dammam, always knew that she would work in an office, even though when she was growing up in Saudi Arabia, she knew very few women who worked outside of the home, and almost none in company offices.

“I always imagined myself wearing a suit, going to an office, and working for a global company, even though it was not easy to do so at that time,” she said.

Her passion for human resource developed only after an on-the-job assignment in the field of HR at GE’s GEMTEC facility as part of her university degree requirement.

But it’s not just HR that she enjoys. She is drawn, not to the corporate offices of professional employees, but to manufacturing and service workshops with technicians and workers, in part because they come from such a range of backgrounds, education levels, and nationalities.

At GEMTEC, she has the opportunity to learn about and engage with people from many different cultures. “I bring this home, and can teach my son to respect others, to be open-minded to other cultures and religions, and to learn how to interact with other people.”

She also enjoys how every day presents new opportunities to help employees. “I’ve learned to find ways to make decisions that are fair, both for the employee and for the company. Finding solutions that are fair for everybody is a part of my job that I really enjoy. Seeing people leave my office with a smile makes my day.”

As the first woman in her family to work in an office, Sarah’s advice to young women is to always try. Saudi Arabia today is welcoming women in many professions, and she says, “It’s important for women to never be afraid to make mistakes because trying is the best way to learn. Whether in your personal or professional life, always be open to new experiences.”