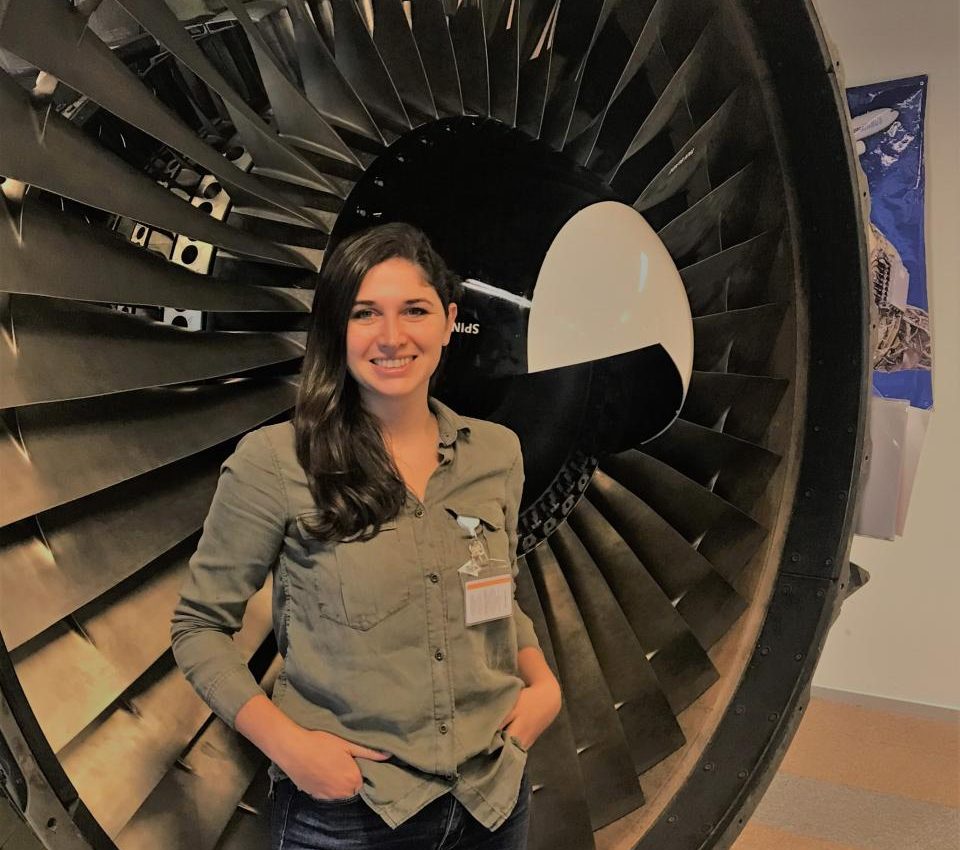 Ozge Kum is the “cool” parent at her daughter’s primary school. As a lead design engineer with GE Aviation at the Turkey Technology Center, she’s “famous” among her daughter’s classmates as “the mother who makes aircraft engine parts.”

More specifically, she works in the research and development department at the center in Istanbul, helping to design new airplane and helicopter engine components, redesign existing ones, and assess the quality of new and old components.

It’s a field she’s been passionate about for years, choosing to double major in Materials and Metallurgical Engineering and Mechanical Engineering at Yıldız Technical University in Istanbul.

What she loved about both subjects – and still loves about her engineering work today – is the creativity required. She finds engineering similar to her other favorite subject: art. In fact, she had a tough time choosing between engineering and art when entering university.

“In both, you follow the same steps. Everything starts with an idea. You think about it, then you build it, bring it to life. In both fields, you see the results or your ideas and you implement them.”

She credits her family’s openness for her decision to choose engineering. “One of the most important factors was my family’s perspective. Many families have prejudices and stereotypes around jobs. But I was lucky, in my home, I never heard anyone describe some work as a man’s job and other work as a woman’s job.”

“That’s something that I am trying to offer my daughter and [two-year-old] son, so they will be able to dream about their careers, free of stereotypes.”

After graduating with high marks despite the challenges of fulfilling a double major, Ozge was hired by an automotive company, where she worked several years as research and development engineer. When her daughter was born, she left that job to care for her new baby and earn an MBA.

If that wasn’t enough to juggle, she also moved with her husband across the country, to far eastern Turkey, where he had been transferred for work. While caring for a newborn and studying remotely for her MBA, she also had to adjust to life in a small town far from family.

Three years later, they returned to Istanbul, and Ozge began looking for work. She was disappointed to find that many companies asked her personal questions about whether she planned to have more children or take another break from her career.

Then, she got an interview with the Turkey Technology Center, which is home to GE software and mechanical engineers doing work for GE Aviation, GE Gas Power and GE Digital.

She found GE is a company that supports women and can point to a number of women in senior roles, including the CEO of GE Turkey, the GE Aviation site leader, and many other women in management roles.

‘Solving a riddle every day’

In such an environment, Ozge can focus on her job, which she really enjoys because each project must be approached from “different angles. You have to take lots of factors into consideration, assess lots of engineering criteria. I feel like I’m solving a riddle or a logic puzzle every day.”

One of her biggest professional challenges occurred when she was asked to assess, and either accept or reject, a large and costly gas turbine part that had come off the production line and been flagged for not conforming to exacting production standards. The customer was expecting the gas turbine and the production timeline was tight. She had little more than a week to review the mounds of data related to the part and the parameters related to its use and operation. In short, she needed to determine whether it was safe to install the part into the gas turbine.

Throughout the meticulous, step-by-step process, she was careful to keep all production and customer-facing teams apprised of her progress. Ultimately, despite the high cost of the part and the urgency to ship to deliver for the customer, her analysis showed the part could not be used.

“In aviation, safety is at heart of everything.”

‘Not what you say, what you do’

Despite the satisfaction she gets from her work, her proudest accomplishment is inspiring young women to enter the STEM subjects of science, technology, engineering and math. She provides mentoring and serves as a role model. “I see how I am touching others’ lives and encouraging them.”

She is a member of the global GE Women’s Network, which is active in Turkey. Over the past five years, the group in Turkey has touched the lives of more than 8,000 girls through by collaborating with important universities and reputable organizations. and we supported them with different programs such as coding supported STEM initiatives, early career training and mentoring.” through numerous project, including mentoring programs and coding classes.

As she inspires girls and young women, Ozge herself considers both her mother and her aunt as role models. Although her mother did not work after having children, she studied and worked as a draftsman, and Ozge recalls that “she would talk fondly about her work, which was in a technical field just like engineering is.” Her aunt, meanwhile, studied law and became a judge, moving to a distant town for her first position. “She was a strong woman who worked her entire life.”

What her mother and aunt demonstrated, and what she sees with her own daughter, is that “it’s not what you say. It’s what you do. That’s how you influence, by demonstrating what you are saying with what you are doing. This is what I’m trying to show in my own work and life.”

When mentoring or speaking to young women, she points to her own career in engineering as an example. The STEM workshops that she and other GE Women’s Network volunteers lead in schools also is important for that reason: “it helps young women see it’s something they can do, it’s not hard.”

“I’m passionate about encouraging the next generations, and also my kids, to do what they want, whatever field, whether in STEM or not. Don’t let stereotypes shape their choices; let them choose based on their own interests.”

View all from: Turkey, Aviation