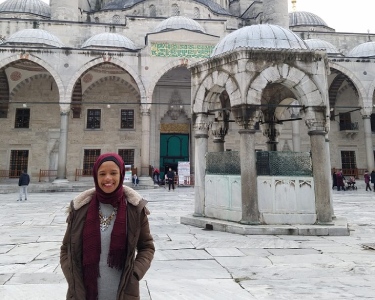 “Fearless women” is a rallying cry in many settings these days, but during October’s Breast Cancer Awareness Month in Turkey, it was a call for women to overcome their fear of getting a mammogram.

The campaign addressed head-on the reality that 25% of women avoid screenings because of the discomfort of the process, and the fear and anxiety generated over the potential results of the exam.

However, mammograms can make a huge difference in the outcome for women diagnosed with the disease, which is the leading form of cancer for women globally and in Turkey.

The innovative #FearlessWomen (#KorkusuzKadınlar in Turkish) campaign leveraged the power of social media influencers who posted images of themselves with warrior marks on their faces using lipstick provided by Sephora Turkey to convey the concept that women should overcome their fear of having a mammogram.

Not only did Düvenci speak at the event launching the campaign, she also tagged friends and encouraged them, and all her followers, to be fearless and make an appointment for a mammogram.

Throughout Breast Cancer Awareness month in October, UPS used the imagery and messages from the social media campaign to help spread awareness to the wider public as it delivered thousands of shipments every day across the country.

“In rallying behind the #FearlessWomen project, we made a powerful statement: ‘We are aware, we are fighting, we are winning’,” said Yelda Ulu Colin, General Manager, GE Healthcare Turkey. “And we are taking a powerful social step forward in increasing awareness and understanding amongst Turkish women of this debilitating disease.”

GE Healthcare is a leader in addressing one of the main reasons women avoid screenings: the discomfort involved in the process.

GE Healthcare has designed a new mammography system that takes into consideration the feedback from patients, technology experts and radiologists. Using the Pristina Dueta, a breast compression device, women can use a controller to adjust the compression to provide more comfort.