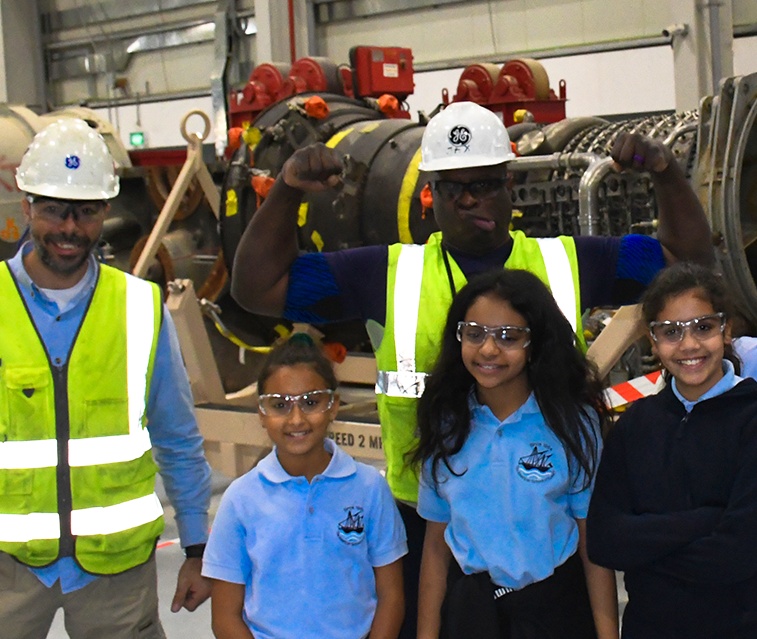 Finding inspiration can be a challenge for science fair projects, but it won’t be for fifth graders at the American School of Kuwait. GE recently invited a batch of 50 students to give them an up-close experience with electricity generating equipment that set their thinking in motion. The fifth graders will participate in a science fair, under STEM (Science, Technology, Engineering, and Mathematics) curriculum, in January 2020.

Over three days, the GE staff at the Kuwait Technology Center (GEKTC) hosted the school students where they got to see and learn about industrial science labs and giant power generation machines.

“Hosting the school children at GEKTC was a very special experience not only for the students but also for the GE staff members,” said Dr. Khaled Al-Banaa, Director General of GEKTC.

“We made special arrangements and developed a module for the children to take them through our Tooling Center, R&D Center and Training Center, where our technical staff explained the use of the tools, instruments and turbines in a simple and fun way.”

The students had several interesting interactions with the GE engineers during the visit. They learned the principles of electricity and how it’s generated, and what role gas turbines and steam turbines play in the process.

They also watched the inspiring GE commercial, “Meet Molly – the Kid Who Never Stops Inventing” and heard from Kuwaiti national Faisal Al Madani, who talked about his journey to GE, beginning with his deep interest in science and his participation in GE’s prestigious Edison Engineering Development Program.

Established in 2016, GEKTC serves customers in the Middle East and Africa. The center has the capability to impart both theoretical and practical hand-on training to up to 900 people a year. The tooling center provides maintenance and modifications for both GE and non-GE gas turbines, generators and steam turbines, while the R&D center develops innovations in the field of power that are relevant to Kuwait and the region.

GEKTC is a landmark initiative that underlines GE’s more than 40-year commitment to Kuwait’s development, fostering Kuwaiti technical talent. Read more about GE’s contribution to the power sector and human capital development in Kuwait and across the Middle East, North Africa, Turkey and Pakistan region.

View all from: Kuwait, Gas Power