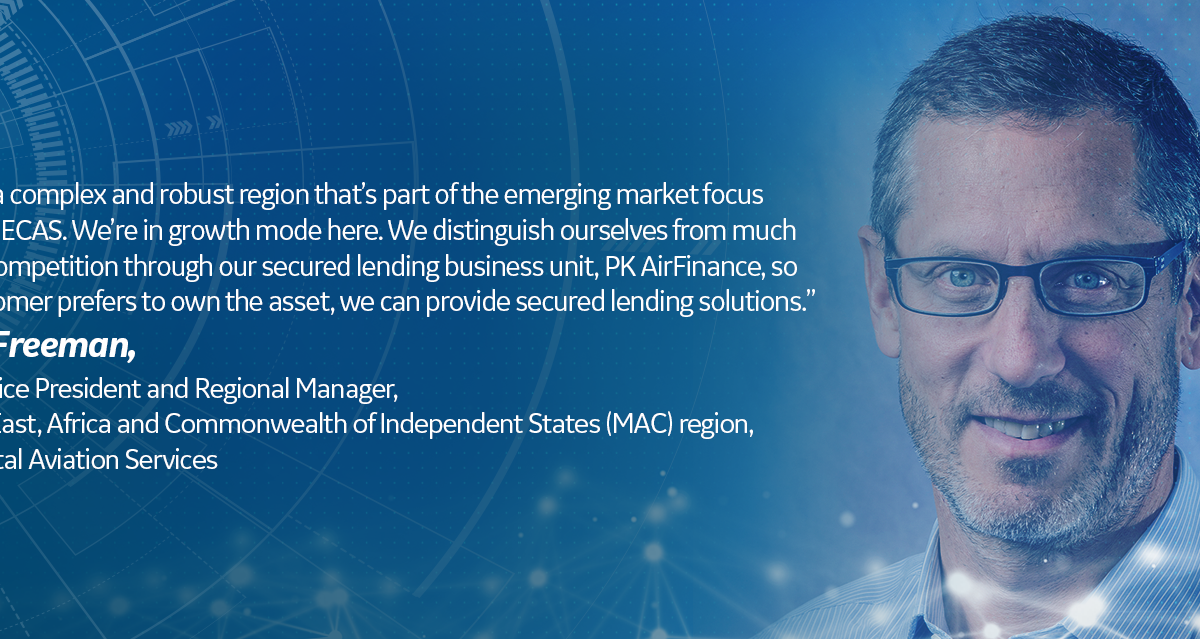 It’s ‘Growth Mode’ for Aviation Leasing in the Middle East, Africa and CIS

One of the most surprising aspects of the commercial airline industry is that about 40% of the planes carrying passengers through the skies aren’t owned by the airlines flying them. They are leased from firms such as GE Capital Aviation Services (GECAS).

As Todd Freeman, Senior Vice President and Regional Manager of the Middle East, Africa and Commonwealth of Independent States (MAC) region, explains, airplanes are such large assets with such long lifetimes, it often makes sense for airlines to lease them instead.

Leasing aircraft allows airlines to grow quickly by freeing up capital for other business purposes – flydubai and Air Arabia are examples of airlines that have benefited from this strategy. Leasing provides fleet flexibility, enables balance sheet management and can be used as a risk mitigation strategy.

In the MAC region, where traffic growth is generally in double digits, aircraft financing needs are particularly strong, Freeman says.

“This is a complex and robust region that’s part of the emerging market focus within GECAS. We’re in growth mode here,” he says.

GECAS currently has leased or financed more than 200 commercial and cargo aircraft and helicopters in the region, worth over US$7 billion, helping make the company the regional leader in aircraft financing, Freeman says. “We distinguish ourselves from much of the competition through our secured lending business unit, PK AirFinance, so if a customer prefers to own the asset, we can provide secured lending solutions.”

GECAS is a major player in not just the MAC Region. They are the world’s leading commercial aircraft and engine financier. Globally, GECAS has a fleet of nearly 2,000 airplanes in operation or on order, with around 250 customers in over 75 countries.

GECAS’ ability to execute on complex, large-scale projects is what differentiates the lessor from other firms. That includes helping airlines grow their fleet rapidly and providing mixed-finance solutions that blend leasing and secured financing.

The company’s scale and technical expertise are key to its ability to complete complex, short timeline, and cross-jurisdictional projects for their customers.

For example, GECAS recently transitioned 17 regional jets coming off lease in North America to an airline in Russia. Despite the varying physical conditions of the aircraft, the many modifications required by local airworthiness authorities, and the tight one-year timeline, GECAS successfully completed the project within the customer’s timeframe. “It was the largest single redeployment of a unified group of aircraft from one country to another,” he says. “This is how we really distinguish ourselves and showcase our scale and technical capabilities.”

In another case, GECAS delivered a new customer’s first aircraft one month after signing a leasing letter of intent. “Not many organizations execute that quickly and flawlessly.”

GECAS’ longevity in the region is another competitive differentiator. With 25 years in the region, the company has formed solid, long-term relationships and a deeper understanding of the market.

“In this part of the world, there are periodic episodes of turbulence, but we have the experience to look at the situation rationally. We assess, we look around the corner, and when we can see that the fundamentals of the airline and the market are strong, we’ll execute the deal,” Freeman says.

Although the Middle East, Africa and CIS markets are different, one common theme across them is the relatively low penetration of low-cost carriers (LCC), and that presents an opportunity in the region. With only one carrier in Russia, a low rate in the Middle East and even fewer in Africa, the LCC trend will continue. Only the pace of expansion is debatable,” Todd says.

Another trend in the region that will drive market growth is the expanding middle class and the associated increase in demand for air travel.

“Other trends in the region include the need for consolidation in both Africa and the Middle East. Africa has demand for greater intra-regional connectivity, something that Ethiopian Airlines is seeking to address. Markets like Algeria, which have little experience with leasing, offer promise. So, does Nigeria, which has exciting opportunities, capital, and entrepreneurs, but needs greater investment in airport infrastructure,” he says.

Furthermore, rising oil prices in the Middle East will have a positive impact on air traffic growth in the region. Todd explained that the aviation market is unique in how it is impacted by oil prices. “In other regions, higher fuel costs pose a challenge for airline profitability, but in this part of the world, it’s more complex. Higher oil prices will have a knock-on positive effect on the economy, which in turn stimulates air traffic,” Freeman explains.