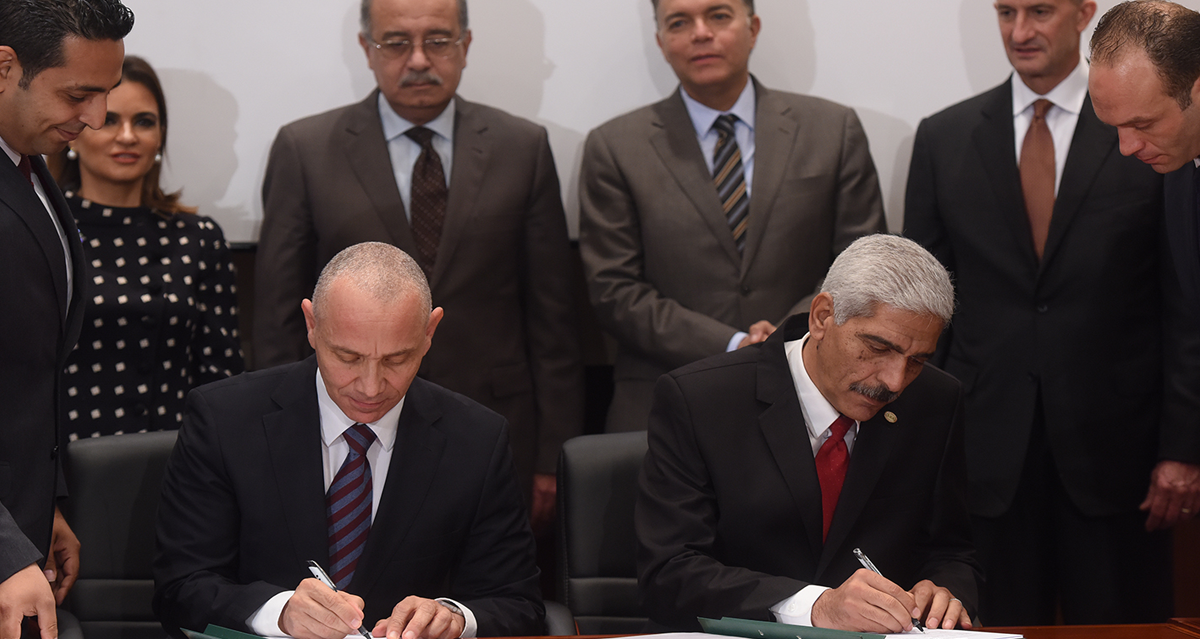 Egypt is home to the first railway in the Middle East and Africa and one of the first rail lines globally. This legacy is being honored with a major investment in rail infrastructure that shows how the opportunities in Egypt’s economy and rail sector have drawn capital for more than 150 years.

Reflecting the strength of the country’s economy and development program today, GE has signed a $575 million agreement with the Ministry of Transportation and the Egyptian National Railways (ENR) to supply 100 GE ES30ACi Light Evolution Series Locomotives, which can be used for both passengers and freight, a 15-year parts and technical support agreement and technical training to more than 275 Egyptian engineers and technicians.

Aligned to Egypt’s Sustainable Development Strategy: Vision 2030 to develop local infrastructure and improve services to citizens, the agreement also supports Egypt’s goal to raise the share of freight transported by rail from 1% to 10% within 15 years.

H.E. Dr. Hesham Arafaat, Minister of Transportation said: “This agreement will leverage the role of ENR in transporting goods using rail which is aligned to the Ministry’s vision to improve rail infrastructure, decrease loads on the road, and help achieve our target to transport 25 million tons of goods annually using rail by 2022. The agreement also includes servicing and improving the efficiency of GE locomotives that were supplied in 2008, in addition to providing parts needed for the maintenance of GE fleet and providing training to Egyptian skilled labor.”

The agreement also helps optimize the efficiency and performance of the locomotives by facilitating both planned and unplanned maintenance, as well as overhauls through a 15-year, parts and technical support agreement that ensures that all required parts are available. The service agreement covers the new locomotives, as well as 81 GE Evolution Series locomotives already operated by ENR.

To highlight the importance of this agreement to Egypt, the signing was attended today by including Egypt’s Prime Minister Sherif Ismail; H.E. Dr. Sahar Nasr, Minister of Investment & International Cooperation in Egypt; H.E. Dr. Hesham Arafat, Minister of Transportation in Egypt; H.E. US Ambassador Robert Beecroft, US Ambassador in Egypt, Medhat Shousha, Chairman of ENR; and John Rice, Vice Chairman of GE and President and CEO of GE’s Global Growth Organization.

By upgrading Egypt’s rail network, ENR will reduce pressure on the road network, thereby reducing accidents on roads and rail lines, cutting delays and costs to the country’s domestic supply chains, and accelerating the country’s economic activity and domestic trade.

The GE ES30ACi Light Evolution Series Locomotive is equipped with a 12-cylinder, 3,200 horsepower GE Evolution Series engine. The locomotive delivers high power output to enable enhanced productivity and flexibility in heavy-haul operations; additionally, these locomotives can be used for both passengers and freight.

View all from: Egypt, Transportation