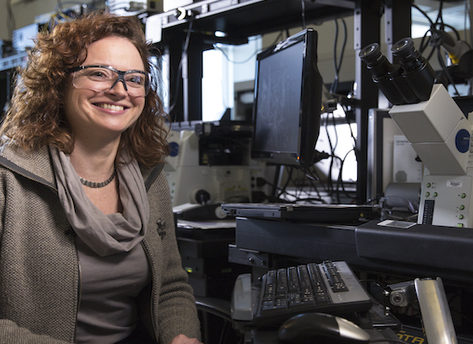 Science In Action: New Breakthrough TV Series From NatGeo And GE Zooms In On Live-Changing Research

Grazer and Oscar-winning director Ron Howard (A Beautiful Mind) have teamed up with GE and National Geographic Channel to make a six-part documentary TV series focusing on scientific breakthroughs and innovation.

Grazer and Howard are the executive producers of the series, also called Breakthrough, which launches this Sunday with an episode focused on fighting pandemics. The episode will air at 9 pm ET on the National Geographic Channel and will also stream on GE Reports.

Like the rest of the series, the pandemics episode will draw on research at GE’s labs. “We’ve been living in this world,” Beth Comstock, GE’s vice chair for business innovations, told Variety. “That’s why we exist. But we’re able to bring the perspective of ‘is this a breakthrough or not?’ — whether it’s ours or someone else’s.”

GE scientists have had their share of breakthroughs. Over the years, the company has employed several Nobel Prize winners, as well as scientists who narrowly missed the award, like Nick Holonyak who invented the visible LED. Albert Einstein, Lord Kelvin, Guglielmo Marconi, I.P. Pavlov, Niels Borh and other science superstars have visited its research headquarters in upstate New York.

Each of the Breakthrough episodes was directed by a different marquee name. Peter Berg was behind the Pandemics episode, Angela Bassett did an installment on clean water, Paul Giamatti focused on human engineering, Ron Howard on aging, Brett Ratner on improving the brain, and Akiva Goldsman on the need for clean energy.

Breakthrough will follow scientific explorers from leading universities and institutions during their daily quest for disruptive innovations that could change the way we live.

The episodes will also feature GE scientists like Peter Tu, who is working on computer vision, John Schenck, who helped GE build its first MRI machine and used it to image the brain, and Fiona Ginty, who works on the leading edge of cancer research. “When I was a young child, I wanted to be an inventor, but thought that everything had already been invented,” Ginty says. “As an adult scientist, I came to see how much work there’s left to do.”

GE Reports will profile the GE scientists and their projects over the next six weeks, starting with their work on wiping out malaria. “It’s science in real time,” National Geographic Channel CEO Courteney Monroe told Variety. “We’re covering scientific breakthroughs that are happening right now. Certainly, science is not waiting for us.”