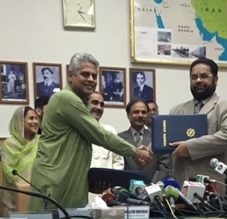 A Big ‘Evolution’ Is Coming to Freight Rail in Pakistan

According to the World Bank, freight railways can do the “heavy lifting of economic development” given the central role that transportation and logistics infrastructure plays in the development process. No wonder the Government of Pakistan aims to increase the share of rail in the country’s transportation sector from 4% to 20% under its Vision 2025.

GE will make a big contribution to Pakistan’s Vision 2025 railway freight goal with the just announced agreement by Pakistan Railways to purchase 55 diesel-electric Evolution Series ES43 ACi locomotives. This will be the first time that GE’s Evolution Series locomotives will be used in South Asia. Delivery of the locomotives is expected to be completed by mid-2017.
The locomotives will haul freight across more than 1,300 kilometers of track in Pakistan, between the southern port city of Karachi and the plains of Lala Musa and beyond, helping to transport essential freight across the country. Each locomotive has the capacity to haul more than 3,400 tons of cargo per trip.

One of the most important uses of the new Evolution Series locomotives will be to move critical supplies of imported coal from the ports of Karachi to power plants in Jamshoro, Sahiwal and other locations. These train trips will help ensure the country’s coal-fired power plants have the fuel they need to generate the electricity that is essential to meeting the economy’s growing demand for power.

Another exciting potential use for the locomotives will be along the China Pakistan Economic Corridor, a megaproject that will connect northwestern China to Gwadar port in southwestern Pakistan, to transport oil, gas and other goods via a network of road, railway and pipeline infrastructure.

GE has been a committed partner to Pakistan Railways for more than 35 years, supplying over 125 locomotives in their current fleet. This same commitment extends across other key sectors of Pakistan’s economy, including healthcare, power, oil and gas, and aviation, and is supporting the nation’s development of human capital and vital infrastructure.