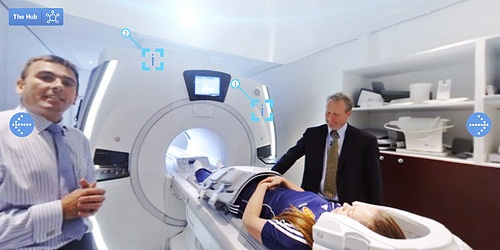 GE Healthcare unveiled a ‘one of a kind’ virtual video tour of the Olympic Village Polyclinic. The ground-breaking interactive video, shot in 360 degrees, a first within a healthcare setting, allows viewers to have an exclusive view within an Olympic Village Polyclinic and learn more about the broad range of medical imaging technologies in use from GE Healthcare...a truly VIP behind the scenes experience!

Viewers can navigate from room-to-room between the advanced imaging and diagnostic technologies in use, including magnetic resonance imaging (MRI), computing tomography (CT), ultrasound, X-Ray, electrocardiogram (ECG) and IT & monitoring systems that will help supply care, early diagnosis and treatment for over 22, 000 competing London 2012 Olympic and Paralympic athletes, as well as Games’ attendees and team staff.

Also featured in the video are officials from the London Organising Committee for the Olympic and Paralympic Games (LOCOG) explaining how the Polyclinic facility is available to offer world-class healthcare services during the Games 24/7, as well as how the sophisticated medical equipment will be put to use.