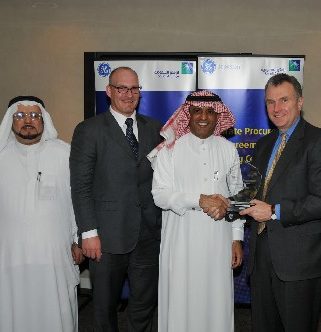 GE has established its presence in Saudi Arabia by partnering with government bodies and key customers for the last 70 years. The Company has consistently taken part in various development initiatives that play an increasingly crucial role in helping propel the country’s, as well as the region’s, economic, infrastructure, and energy growth.

GE’s Vice Chairman, GE, and President & CEO of GE Energy, John Krenicki, is currently visiting the Middle East, where he attended the signing of a Corporate Procurement Agreement (CPA) with Saudi Aramco (the national oil company of Saudi Arabia). The CPA establishes a long-term framework for the supply of GE turbomachinery equipment and services to support efficient production of oil and gas in the Kingdom.

The agreement is designed to streamline and simplify working processes leading to reduced costs and shorter cycle times for Saudi Aramco’s oil and gas production projects. It also includes a joint technology development program to boost the performance of Saudi Aramco’s already installed fleet of turbomachinery equipment, which includes over 60 gas turbines, 90 compressors and more than 100 pumps.

Moving forward, Saudi Aramco and GE plan to expand the agreement beyond the oil and gas sector to cover all long-term cooperation that the partners expect to establish for future projects in the energy, healthcare and aviation industries.

The Kingdom is home to seven GE facilities and the largest regional workforce of 700 employees. The Company’s relationship with Saudi Aramco has been significant to the country as it goes back 50 years and is a tangible demonstration of GE’s commitment to the Kingdom.