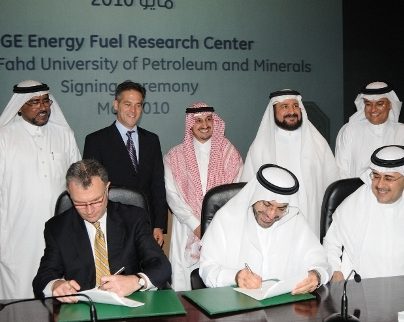 “Fuel flexibility and efficiency can be a cornerstone for the continuing growth of the energy industry, a key component for a diversified and prosperous Saudi economy. Initiatives and commitments, such as the ones made by GE today, can go a long way toward achieving a sustainable energy future for the Kingdom,” said HE Dr. Khaled S. Al Sultan, KFUPM Rector and CEO.

John Krenicki, GE Vice Chairman and President and CEO of GE Energy, His Excellency Dr. Khaled Bin Saleh Al Sultan, and Joe Anis, GE Energy’s president for the Middle East were present for the signing ceremony, underscoring not only the importance of this historic step, but also highlighting GE’s commitment to support the Kingdom’s industrial growth and development.

The GE Energy Fuel Research Centre will focus on bettering the understanding of alternative fuels in Saudi Arabia and maximising their use in the country. The centre is also expected to help find ways to increase fuel efficiency for power plant and refinery applications, an aspect vital to promoting sustainability and supporting the Kingdom’s national development strategy.