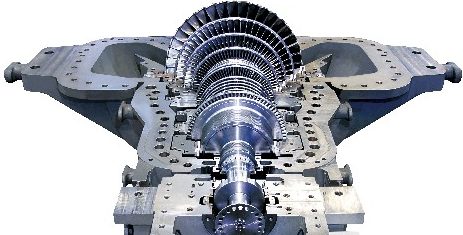 To help Saudi Arabia meet its power generation goals efficiently, GE has received a contract of $300 million to supply five steam turbines to Saudi Electricity Company’s (SEC) Qurayyah Open Cycle Power Plant in the Kingdom’s Eastern Province SEC expects generating capacity will need to be increased from the current 45GW to 70GW by 2020, or around 3GW every year.

The steam turbines will add to the 15 GE F-Technology gas turbines already operating at the site, converting the plant to combined-cycle operation (two gas turbines and one steam turbine). In a combined-cycle configuration, exhaust gas from a gas turbine generator is converted to steam, which is then used to drive a steam turbine-generator, enabling the plant to produce additional power without an increase in fuel consumption. The thermal efficiency of the plant will increase to 57.5% in combined cycle operation (compared to 38.5% in simple cycle operation). Each point of efficiency increase translates to major savings in fuel costs for each megawatt of power produced. The increased fuel efficiency of this combined cycle technology means that less carbon dioxide is produced per megawatt of power generated, thereby reducing the site’s carbon footprint considerably.

Once the power plant conversion to combined-cycle is completed (scheduled for the second quarter of 2012), the site’s power output will increase from 1,907 – 3,418 megawatts, equivalent to 10% of the SEC installed capacity in the Eastern Province.