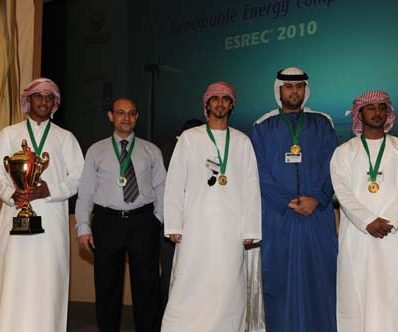 GE recently supported UAE’s first Engineering Student Renewable Energy Competition (ESREC), hosted and organized by the Electrical Engineering Department of UAE University (UAEU) in Al Ain. Opened in 1976, UAEU is one of the leading and pioneering educational institutions in the region, with significant research and community services.

The event challenged students to think creatively and scientifically about ways to generate renewable energy. The winning project would get the opportunity to travel to GE’s research headquarters in New York where they will meet some of the leading scientists from a variety of fields and get a peak into significant research projects. Thirty-five Universities from the UAE, Oman and Saudi Arabia participated.
A strong commitment to devise innovative solutions, especially when it comes to harnessing renewable energy, was the joining grounds between GE and ESREC. Sami Kamel, Marketing Director for GE Energy Middle East, was on the project judging panel.

The winning energy project team comprised of four students from UAE University: Ahmed Al Neamini, Rashid Al-Mesmari, Salem Ebrahim Aal Ali and Salem Al Afari. Their winning idea involved being able to extract wind energy through wind induced vibration by a method called “vortex induced vibration” (VIV). The system created is unique because it works even if the speed of the wind is low – currently the key reason why wind energy is not harnessed in this region, as doing so requires a significant wind force to begin with. The method also doesn’t depend upon wind-speed creating devices such as windmills, in that it is truly original. The team took about seven months to devise the idea which is about to go for a patent. It was their graduation project that was completed under the supervision of their academic advisor, Dr.Samir Emam. Now the project will undergo implementation tests outside the laboratory that will help judge the innovation’s feasibility.